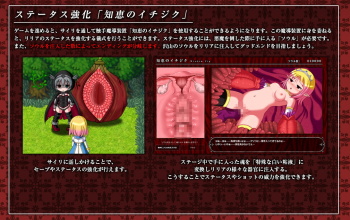 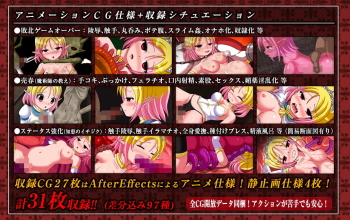 Elven Princess Lilia stands up to fight against an army of demons
in this 8 way directional movement bird's eye view action game.
In order to save her little brother she succumbs to...

[Story]
Founded by Elves, there be a Kingdom of Magic, Esteria.
One day, the Demon Army "Goetia" invades Eseria and lays waste to the Elven defenses...
The castle is ransacked and the kingdom's subjects captured as slaves...

Thankfully however, Lilia, the Princess of Esteria, and her younger brother Prince Phil
were successful in escaping the onslaught and made their way into an underground
safe-hold but... they could not run forever and the malicious hands of Goetia reached
out to snatch away from Lilia her cherished younger brother...

But all was not lost... before Lilia a mysterious girl by the name of Sairi appeared
and granted her a strange staff. With that staff, she would gain the power to stand
up against the demon forces and rescue her little brother Phil!

Thus Lilia head off to the Goetia fortress...
To begin her battle... a battle ridden with lust and violation!.

- Clothing Damage System
As you take damage, the character will proceed from
"Dress" > "Lingerie" > "Naked with Socks" and when
she finally reaches ZERO life, it will be Game Over
with an appropriate defeat animation sequence.

- For those that aren't particularly great at action games, there is a kind of cheat mode called "ObSINity" that will transform the character into a licentious agent of darkness
who is invincible, moves super fast and shoots powerful projectiles.

- Upon Game Over, After Effects animated scenes will be displayed.

- Sex with the Magician Loaf
On each stage there are points where you can have sex with the magician
to unlock and gain access to new types of shots and charge skills.

- The Fig of Knowledge
A Tentacle Type Magitek Device created by a mysterious girl named Sairi.
By injecting into Lilia the "SOUL" fragments she picks up along her way,
Lilia's MAX LIFE and other such parameters will be enhanced.

[Other]
- If reducing her HP is a hassle, just press the Delete key to force her to 100 HP.
- For those who find action games difficult, there is 100% unlocked save data
in the 'omake' (bonus) folder. If you use this you can view the CG without even
having to play through the game.


All published materials only provided here for reference, all rights to them belong to their owners. All materials are on the third-party resources, and the site owner is not responsible for their use and distribution. If you believe that the rights to the material on this site belong to you, please contact the site administrator.
﻿
Мы в соц.сетях